This week, we’re talking about assistive technology in our schools. Assistive technology, or AT for short, is any device that allows kids with disabilities to access content, skills, and processes in ways that level the playing field with respect to their classmates. These technologies come in many different forms depending on how they assist the student and what disability they mitigate.

For example, audio books are one of the best assistive technologies available to students who have trouble accessing print. Whether the child is blind, dyslexic, struggles with a processing disorder, or whatever, audio books provide a pathway by which a child who has trouble reading with his or her eyes.

Here, is a child reading an ebook on a Kindle Touch while listening to an audio version of the book provided by Learning Ally. This child qualifies for Learning Ally’s services, but had an easier time following along with the voice on an e-reader that allowed him to manipulate the text size. All of this, gave this young man the accommodations he needed in order to read one of R.L. Stine’s Goosebumps novels. When I met him just months earlier, he was unable to read Dr. Seuss’s One Fish, Two Fish, Red Fish, Blue Fish to me. This is the power of assistive technology.

Assistive technology does more than help kids read, though. We’ve issued NEO2 personal keyboards to students who are dysgraphic. We’ve issued digital spelling aids to kids with memory and retrieval disabilities. The Livescribe Smartpen brings AT to a whole new level giving the student the means to record lectures, take simplified notes, transmit those notes to digital platforms, and return to the lecture later in order to take the time he or she needs to assimilate the content.

Two things got me thinking about the power of AT this week. First, my 7-year-old and I were watching this DARPA video over the weekend featuring disabled vets testing prosthetic arms:

Imagine the finesse involved in drinking from a water bottle or eating a grape. Technology makes these mundane (but previously impossible tasks) possible again.

Second, I got a new student on Friday. This young lady arrived in the United States from China just days ago. Her mother insists that she attend our school despite the fact that we have no ESL program on campus. The girl speaks VERY little English and doesn’t understand much more. While wrestling with what I might do with this child after her translator left us (she had to get to class, herself), two of my students volunteered to take her under their wing. These ladies were undaunted by the fact that neither of them spoke any more Chinese than our new friend spoke English, and sure enough, by the end of class, all three of them had their phones out and were using Google Translate to carry on a conversation. They opened the door through which I will be able to start working with this child and begin the long journey of learning English in a mainstream classroom.

Given my past experience with struggling readers and writers, the amazing heights to which state of the art engineering is soaring, and this new experience using tech to communicate with a human being from an entirely different linguistic background, I figured that when #slowchatED needed a moderator this morning, something in the universe was telling me to start the conversation.

So here we are. Remember to tune in to #slowchatED each day this week for a different question and throughout the day each day, so you can stay involved in the discussion.

If you enjoy Twitter conversations on education and you’re not yet familiar with #slowchatED, I highly recommend having a look. Rather than juggling questions and answers at the breakneck pace of many popular discussions, the #slowchatED model offers the opportunity for conversations that may benefit from a little more reflection. We push out one question per day over the course of a week, and throughout the week, participants are welcome to share their ideas as they are able and at their own pace.

Using the #slowchatED model, I’d like for us to design a school together, looking at individual aspects of school models over the course of the discussion. We’ve discussed similar questions in other Twitter groups, but I don’t believe that we’ve given ourselves sufficient time to explore our own ideas in depth, nor have I see much discussion of what an actual schedule, org chart, etc. would look like, if we had a say in their creation. With this particular discussion, I’m hoping to see not just theoretical ideas but actual concrete and specific solutions to the problems we’ve all dealt with. It’s one thing to give our opinions as critics, but it’s another thing altogether to offer real solutions to the problems we regularly discuss from the point of view of designers—we need to start doing more of this kind of work. Though each question below is broad enough for a Twitter discussion of its own, we’ll use them to work toward our own designs for successful school models in this way:

Q1 What does your ideal school calendar look like (i.e., daily schedule, teaching vs. service days, etc.)?
Q2 What does your ideal physical space look like (e.g., classrooms, offices, community space, etc.)?
Q3 Describe the ideal organizational structure of your school. Who makes decisions and how?
Q4 How do you hire, train, and retain quality teaching talent? Outline your ideal supporting PD program.
Q5 What else makes your ideal school unique or what wild idea would you love to try? What did we miss?
Q6 Write your school’s mission statement.

I’m eager to hear a variety of thoughts on these questions, but I’m even more excited for the ancillary conversations that will be born from our discussion. In particular, I’m curious to know what I haven’t yet thought of as being of central importance for school design. It will certainly be the case that the room will be smarter than any individual, and thanks to the variety of points of view and the general diversity of opinion on Twitter, I expect that these questions will be just starting points allowing us to explore school design more deeply. I hope that we push each other’s ideas to give us the opportunity to dive deeply into what we think is fundamental for school design. There will be no wrong answers!

With these questions as our starting point, how might we design a school? This is your perfect world in which you get to build your perfect school. Assume that there are no restrictions or limits for our designs; but however imaginative and revolutionary they may be, let’s also try to build a school that’s feasible. At the end of the week, I’ll invite everyone to reflect on our respective school designs and capture your model in a blog post of your own to share what you learned in the process. I can’t wait to see what we each build over the course of the week of Feb. 9 on #slowchatED.

Hi everyone. Our daily stories are built upon a torrent of conflicts.

I started #slowchatED last year because I wanted to create a deep pocket of learning in the sometimes shallow pool of Twitter chats. As of now #slowchatED is one of the few regular slow chats on Twitter. A chat that runs an entire week instead of an entire hour. Where other chats are a waterpark ride, #slowchatED is a lap pool. Well, for some people that’s not enough. Some people want to practice scuba diving in our lap pool and go deep. I’m going to blow out the bottom of the pool and allow each of you to explore the story of your problems using a children’s book. This book:

Go to this blog post to read more about using Remy Charlip’s book in your class.

So here’s the technique:

Each day I will pose an “Unfortunately” problem for you to solve. You can solve the problem with words, links, blog posts, songs, videos, photos, drawings… whatever. Once you tweet your “Fortunately” answer then the fun begins. Either myself or someone else will throw an “Unfortunately” at your solution and take the discussion deeper. All stories are a series of conflict, resolution, new conflict, attempt at resolution, resolution that makes things worse, conflicts that make things unexpectedly better and so on.

Who knows where our story will lead?

We will continue this for the entire day. Solutions being provided and new challenges getting in the way of easy solutions. We will add depth to the width of our exploration. Once I throw down the initial “Unfortunately” feel free to play antagonist or protagonist. You can even come to the aid of one of your fellow teachers and save the day… for now.

Then the next day a new “Unfortunately” problem will raise it’s ugly head.

Hey relax…. you’ve got more than an hour to answer these questions. That’s why they call it #SLOWchatED

Can’t wait to see what rises to the surface. Enjoy the moment and get ready for #slowchatED starting Monday Jan. 12th.

The Topic: A chat about how “Unfortunately” the problems in your life are neither simple nor finite.

PS if you have any particular “Unfortunately” dilemmas you would like me to propose for a day please DM or Google DM me your ideas. Thanks…. your faithful skipper and the old man of the #slowchatED sea,  David Theriault

Monday 1/12/15: Q1 “Unfortunately” Your boss put you in charge of the new [terrible idea] “task force” Your first meeting is this Friday. #slowchatED

Tuesday 1/13/15: Q2: You wanted to create an awesome classroom environment but UNFORTUNATELY you are the traveling teacher this year. #threerooms #slowchatED 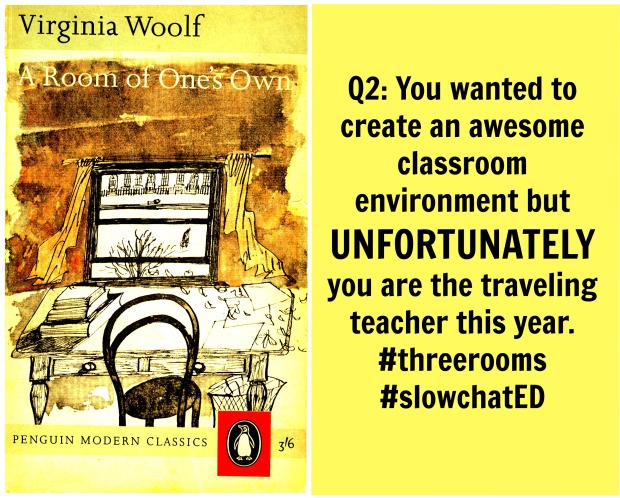 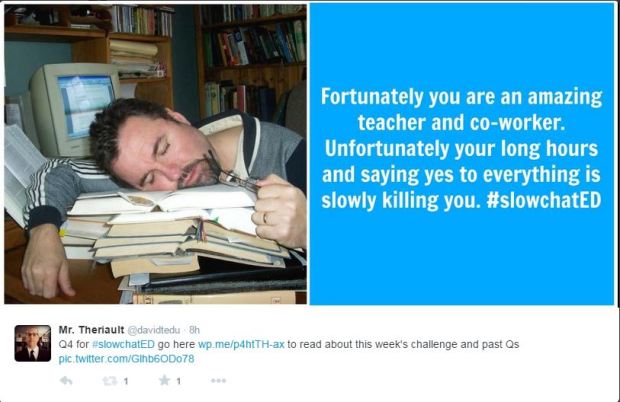 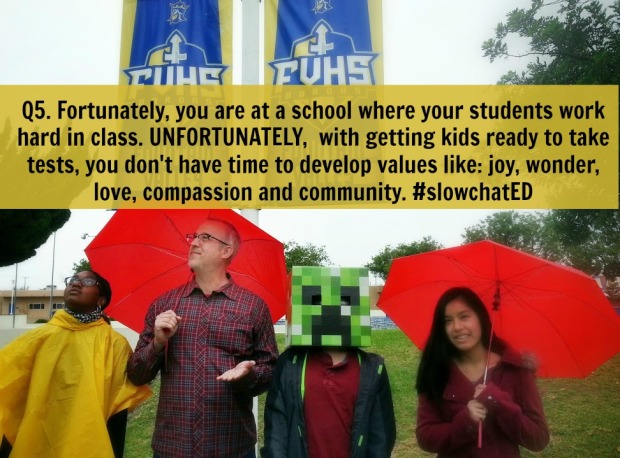 Here is the archive of the entire #slowchatED chat: there was no question six on Saturday because I attended edcampLA. Hope you enjoyed the topic and discussion. See you soon.